Major Melvin Burch-Bynum was born in Peoria, IL and has dedicated his entire adult life to outstanding and unprecedented service to the United State Marine Corps. His decorated career has included special duties, multiple deployments, leadership roles and responsibilites, and a core of spiritual, mental, physical, and social resilience for survival, acquisitions, and quality-of-life ambitions. He leads beside many fellow Marine Corps Officers that abide by the same principles and attitude. Major Burch-Bynum has infused the lives of Enlisted Marines as a former leader at the School of Infantry, MCB Camp Pendleton, San Diego, CA but enjoys communing and learning from Marines that have served in eras preceding his with honor and valor. Spending time as a mentor, watching the Chicago Bears win football games, riding his Harley, and caring for man’s best friend “Harley”, and ballroom dancing with his lovely wife is also the centrifugal force of his existence. Keeping fit in the chow hall and the eateries of the world helps Major to fit into his uniform and to enjoy Birthday Cake with the Marines in 2020 with safe social distancing practices at his forefront.

In his Camies (Marine Corps Uniform), Melvin is an Officer with a role that includes a moment’s notice to serve stateside and abroad, therefore, he is ever-vigilant. Stateside, and in his Civies (Civilian Attire), he is an educator, charitable founder of the Little Free Library in Peoria, Illinois, and completed the hardest race ever known to man, The Iron Man challenge in Chattanooga before the Pandemic. Major Melvin Burch-Bynum is glad that he has traveled the world empowering youth and seniors and is passionate about Literacy and Service.

Melvin loves continuing education and learns from his wife Mrs., Dr. Stephanie Burch-Bynum and they share a faithful bond of marriage and love for the arts, African American History, and all genres of music. Major Burch-Bynum has a story of humility and parental honor, he knows the cost of true cost freedom from the perspective of the accomplished and educated African American’s heart and soul as he proves his application of passion and mission amongst his community each and every day. Melvin relishes mentorship and the sharing of his giving talents lend back to his elementary school years where reading is paramount, he gleans for his lessons during overseas deployments and has touched lives of children from many nations, and his Esprit De Corps with athleticism is remarkable.

The Marine Corps Motto: Semper Fidelis runs deep and on this day, we celebrate the service accolades Major Melvin Burch-Bynum has achieved. Each date, on November 10, we remember the Birthday the Marine Corps when service men rose and became the Elite of the Elite force to be reckoned in wartime and in peace for our Freedom in the United States of America.

We remember all who have served, paid the ultimate sacrifice in our hearts with the families of the fallen, with a taste of cake from the Marine Guest of Honor to the Eldest Marine, and the Youngest Marine. We are proud in 2020 with safe social-distancing we are able to broadcast a full feature interview with Major as he remembers why he is “Still Serving” and why he did set out to step on the yellow feet to become a fine Marine like he has since graduating Boot Camp at Camp Lejeune one life-changing day over 26 years ago.

Thank you for your service Major Melvin Burch-Bynum and Happy Veterans Day from The Christina Silva Show * Educating Our Veterans Day 2020, November 11. #IRONMAN2

Agility, Assimilation, and Admiration are keywords that describe the character of Melvin Burch-Bynum. Today, we once again remind our listeners and patriots all over the globe why we celebrate the 245th Birthday of the United Marine Corps and Veterans Day 2020 with hearts of humility and honor while we remember all that have ever served in the Armed Forces.

A tall order of professionalism, personal etiquette, drive, and commitment must be in place at all times under the name of US Marine. Comprehension of rules, regulations, and rights are traits Major Melvin Burch-Bynum takes seriously. History, resolutions, and higher education are key to assimilating his professional career and his personal ambition of becoming an Iron Man II. Making legendary moves begins with “The Little Free Library” created in honor of Melvin’s dear mother and his father inspires and admires his works in the community and in the military. Change and equality coupled with earned benefits and family leave are what we look forward to in our Camies 2 Civies.

We will discover the role we must play with our right to vote and to become pioneers in our lives from a testimonial filled with Esprit De Corps #SemperFidelis! To relax and be resilient is to be sure you can support our Marines via the Toys for Tots mission and during the holidays and year-round, by saying “Thank you to a Marine, Thank You to a Veteran from Every Era and Every Branch of Service”, it is as easy as that motion. Also, and just as CRS does with each coveted interview, aim to help others Transform, Adapt, and Overcome from your own #Camies2Civies so you can #MERCHFORAWARD with empathy for all our service men and women put on the line. With a Spirit of Voluntarism http:www.Camies2Civies.org we can be proud and rights bearing Americans together, “One Nation Under God, Indivisible With Liberty and Justice For ALL.” #CRSC2C. Photo Credits: Major Melvin Burch-Bynum and United States Marine Corps Veteran Christina R. Silva

We are honored to remember our returning guest and as an outstanding United States Marine Corps Officer in our original interview year ago, meet Major Melvin Burch-Bynum. With a story of valor and a living legacy, we are sure to be uplifted, grateful and highly educated by the testimony and heart of our Champion. 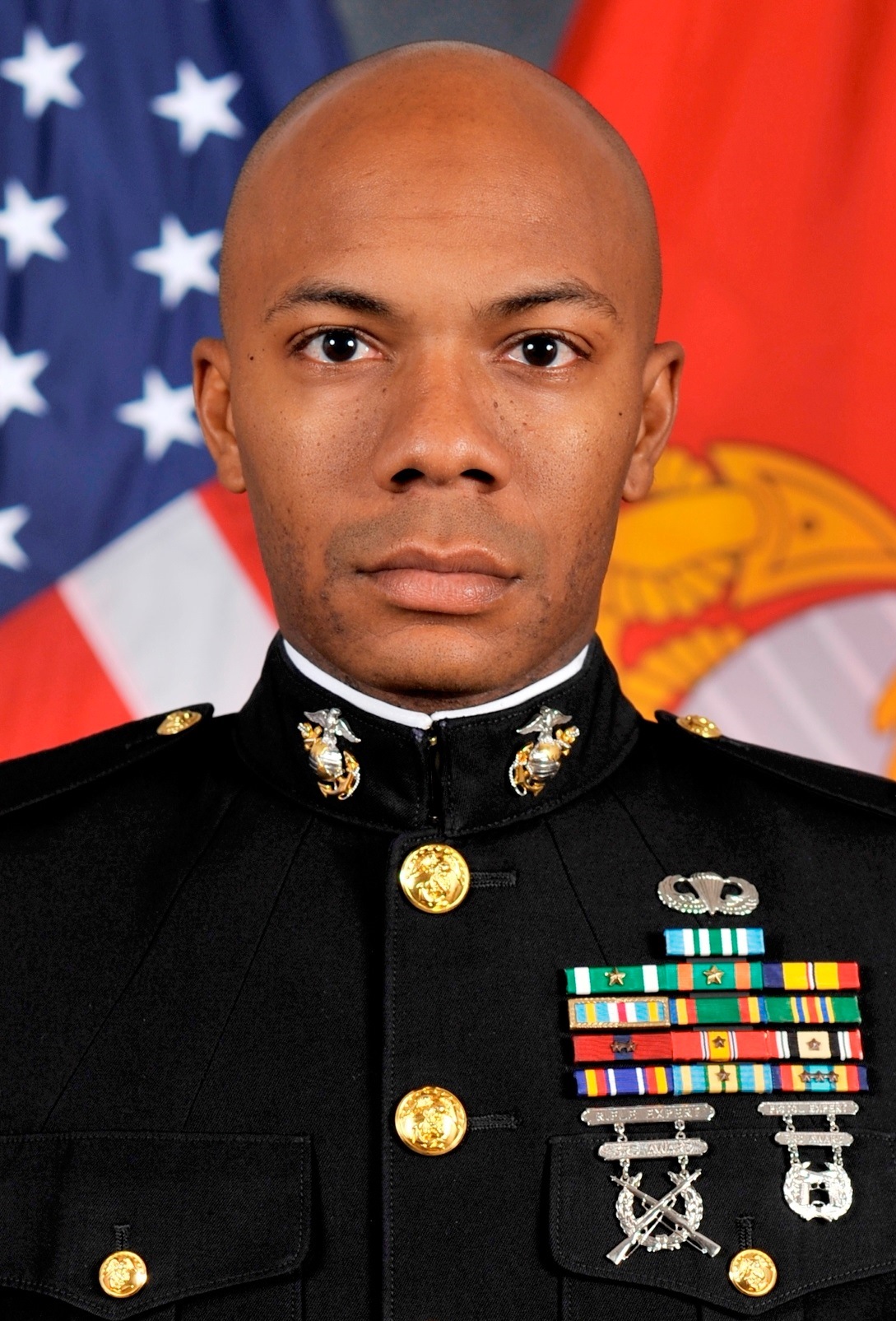 Major Burch-Bynum regards family first and is a product of faith and honor of his parents which proves service, VOLUNTARISM, and a life filled with balance. This “man’s best friend” is Harley and his Porsche and Harley Davidson motorcycle, marathons, stage plays, music and book collection defines culture and the most rich ways to relax, celebrate in the elements and to appreciate history as he makes his own American and African American history with such honor and Esprit De Corps. 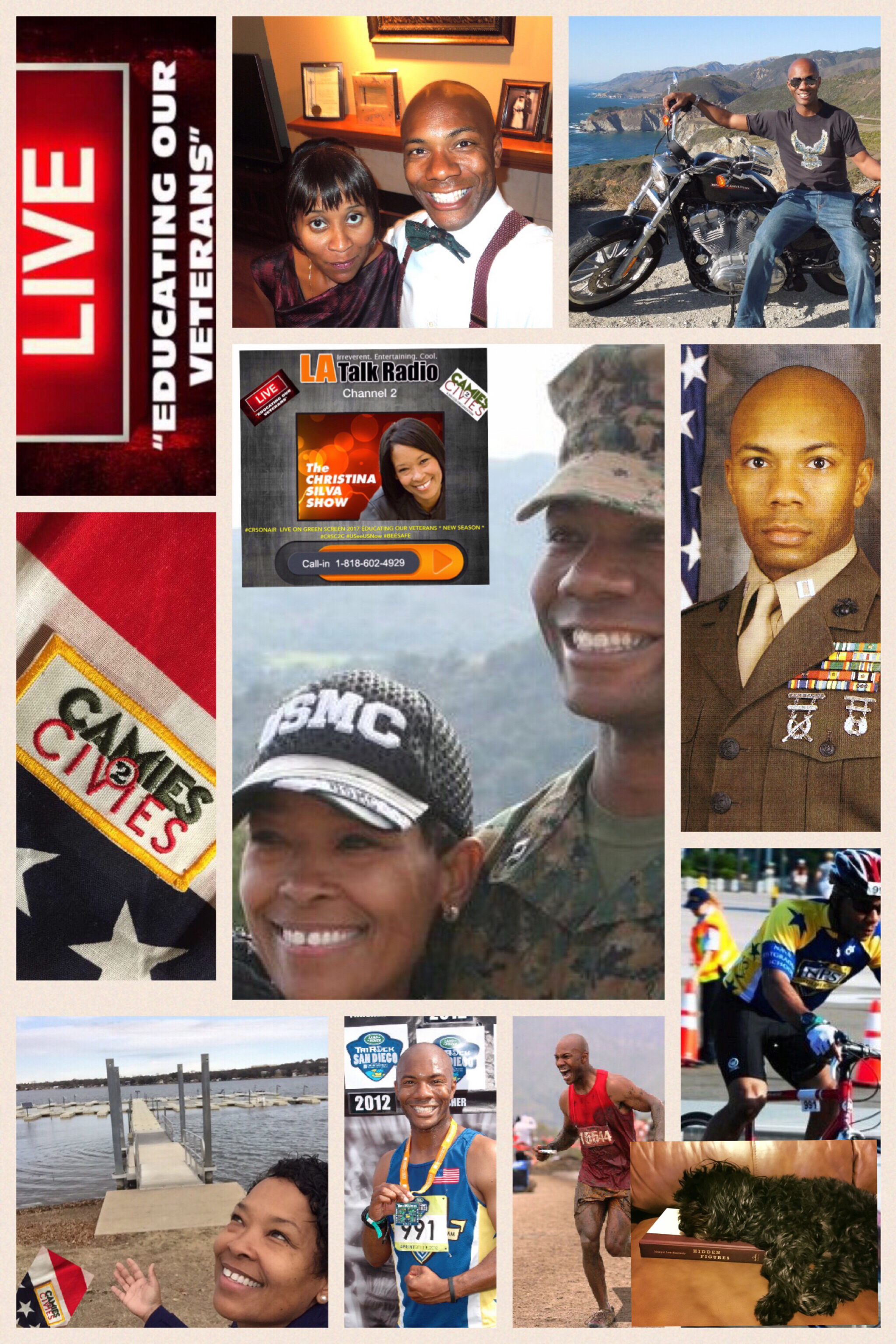 Thank you Major Melvin Burch-Bynum for your deployments and stateside service around the world for 21 plus years. 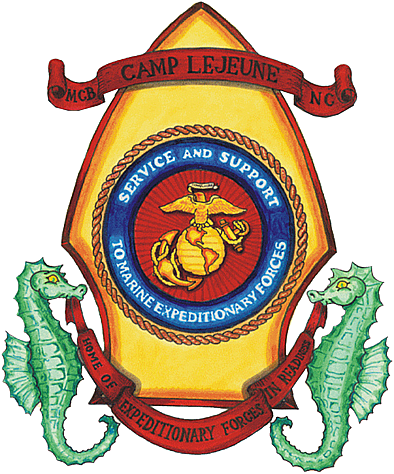 Now, live from Jacksonville, North Carolina serving where Montford Point Marines and 9/11 Memorials stand tall, share with us the meaning of returning to the decorated Camp Le Jeune {Le Jurne} again as your career expands in 2017. We Adapt and We Overcome together. Semper Fidelis